New Research Article from the SCL

The Spatio-temporal Dynamics of Systemic Thinking

Cognition beyond the brain 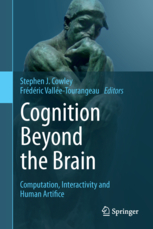 Cognition Beyond the Brain challenges neurocentrism by advocating a systemic view of cognition based on investigating how action shapes the experience of thinking. The systemic view steers between extended functionalism and enactivism by stressing how living beings connect bodies, technologies, language and culture. Since human thinking depends on a cultural ecology, people connect biologically-based powers with extended systems and, by so doing, they constitute cognitive systems that reach across the skin. Biological interpretation exploits extended functional systems.

Illustrating distributed cognition, one set of chapters focus on computer mediated trust, work at a construction site, judgement aggregation and crime scene investigation. Turning to how bodies manufacture skills, the remaining chapters focus on interactivity or sense-saturated coordination. The feeling of doing is crucial to solving maths problems, learning about X rays, finding an invoice number, or launching a warhead in a film.  People both participate in extended systems and exert individual responsibility. Brains manufacture a now to which selves are anchored: people can act automatically or, at times, vary habits and choose to author actions. In ontogenesis, a systemic view permits rationality to be seen as gaining mastery over world-side resources. Much evidence and argument thus speaks for reconnecting the study of computation, interactivity and human artifice. Taken together, this can drive a networks revolution that gives due cognitive importance to the perceivable world that lies beyond the brain.

Cognition Beyond the Brain is a valuable reference for researchers, practitioners and graduate students within the fields of Computer Science, Psychology, Linguistics and Cognitive Science.

Ideally, we should be able to reason appropriately with uncertain information. In reality, research has shown that reasoning under uncertainty is often flawed and intervention efforts designed to improve Bayesian reasoning performance have met with mitigated success. Over the years, the accumulated evidence has tended to suggest that people’s poor performance in tasks requiring them to draw inferences based on statistical information is mainly due to reliance on heuristic thinking, as a result of their general lack of numeracy skills, lower cognitive abilities, or lack of motivation to engage in effortful thinking. We surmised, instead, that participants’ struggle to engage in Bayesian reasoning, together with researchers’ mitigated success in helping participants overcome their difficulties, originates from the material resources customarily used to present information in Bayesian problems—namely, paper-and-pencil questionnaires—because such resources severely constrain what participants can do to discover the correct solution. We report a series of three experiments showing that performance can be substantially improved when material resources afford richer interactions with the probabilistic information presented in the problems, independently of the information format used and without training. We conclude by discussing the implication of adopting a distributed cognition approach to better understand how people’s actual thinking capability may be realised within and outside the laboratory.
This paper was presented on the 20th August, 2.15pm during the 24th Subjective Probability, Utility and Decision-Making conference at the IESE Business School, Barcelona.

SCL on Pint of Science